To share your memory on the wall of Morton Waldman, sign in using one of the following options:

Mort was congenial, generous, and compassionate in his professional and personal life. He always was ready to surprise you with a witty one-liner or humor you with one of his favorite jokes (occasionally adorned with an uncannily perfected Yiddish accent). He also consumed humor: When he watched comedians such as The Marx Brothers, Benny Hill, or Steven Wright, you could behold that his ebullience and bobbing belly created the epitome of joy—and you just had to laugh right along with him! But this good cheer and his dry wit belied the earnestness with which he pursued his many more-heady interests. He became one of the country’s first owners of a personal computer when he purchased a MITS Altair 8800 in 1975—powered by software written by pre-Microsoft Bill Gates and Paul Allen. He devoured all available materials related to personal computing and quickly became an accomplished computer programmer, hand-coding software algorithms to compute his commodity-trade yields and perform price-trend analyses on his stock holdings. His intense love of mathematics, probability, and game theory drew him to the pursuit of beating the odds at horse-racing, blackjack, and poker—and made him a formidable bridge, chess, and backgammon opponent. Mort was well-read and cultured: He could recite verbatim quotes from Shakespeare, lyrics from countless songs, and entire narrative poems, such as Edgar Allen Poe’s “The Raven”. He was a speedy yet accurate reader, a grammarian, and a logophile with an expansive vocabulary who routinely solved New York Times crossword puzzles using a pen. He enjoyed music, taking delight in listening to the discographies Erroll Garner, Stephen Sondheim, Charles Ives, and Prokofiev—among his favorites. He was a gifted pianist and would delight family and visitors by expertly playing ragtime and beloved jazz standards. He had appreciation for art work, cherishing paintings and the fine detail in delicate sculptures—he even dabbled in needlepoint, creating an embroidered image of a beautiful bird that continues to grace a cherished family-room pillow. Indeed, this neurologist exploited all available neurons on both the left and right sides of his remarkable brain.

Mort—the man, the doctor, the husband, the father, the friend—was deeply-deeply loved, respected, and admired by his surviving wife Sandy, son Jonathan, and daughters Stephanie and Nancy, and he will remain alive in their hearts and minds eternally.

A funeral service will be held on Tuesday, March 10, 2020 at 11:00am at Congregation Beth Israel, 2501 Shore Road, Northfield. Entombment will follow in Beth Israel Cemetery, Egg Harbor Township.
Read Less

To plant a memorial tree in honor of Morton Waldman, please visit our Heartfelt Sympathies Store.

Receive notifications about information and event scheduling for Morton

We encourage you to share your most beloved memories of Morton here, so that the family and other loved ones can always see it. You can upload cherished photographs, or share your favorite stories, and can even comment on those shared by others.

Posted Mar 10, 2020 at 11:25am
Dear Waldman family, my sincerest sympathy for your loss of a truly remarkable man. He was one of my mentors as I nervously started my Internship in 1970 at the Atlantic City Hospital. His calm reassurance, insightful knowledge and friendly manner were always a positive influence during my training and later as a trusted colleague. He treated me like a son. He was one of the few colleagues my wife invited to my surprise 40th birthday party, basing her decision on what she must have felt I thought about him in our conversations. Mort once came to my house for a poker game and on entering, noticed my daughter's piano and promptly sat down and started paying a jazz piece to everyone's delight. I had the pleasure of seeing and chatting with him one last time at a breakfast of the old guard organized by the late Dr. Linsk a few years ago. I have thought about him often over the years and will always be grateful for what he contributed to my career and life. I loved the guy! I regret that I will be unable to attend his service today. Claude Delaverdac
Comment Share
Share via:
PB

Posted Mar 09, 2020 at 06:38pm
Dear Sandy and family, I am so sorry to read of Dr. Waldman's passing. A gentle, kind man. I actually worked for him for a short time when he partnered with Drs. Strenger & Greenwood at 1616 Pacific Ave. And I got to know you Sandy, when you and Mort were in the Medical Complex at Zion & Rt. 9. I worked for Periodontal Assoc. of SJ at that time. I so enjoyed reading about Dr. Waldman, he was quite a man. I will always remember his easy going, unassuming manner. Again, I am so sorry for your loss. He will be greatly missed by all who knew and loved him. With my deepest sympathy, Patricia (Trish) Bartling
Comment Share
Share via: 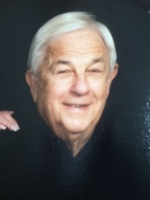