To share your memory on the wall of Molly Kiejdan, sign in using one of the following options:

To plant a memorial tree in honor of Molly Kiejdan, please visit our Heartfelt Sympathies Store.

Receive notifications about information and event scheduling for Molly

We encourage you to share your most beloved memories of Molly here, so that the family and other loved ones can always see it. You can upload cherished photographs, or share your favorite stories, and can even comment on those shared by others.

Posted Jul 22, 2021 at 04:04pm
Dear Molly's family,
I would like to express my deepest condolences to all Molly's family members. Dear Molly - a good woman, mother, grandmother and my great friend. Spending a great part of my life in company of Molly and her relatives was a wonderful and amazing time. It was a pleasure to be a part of your kind and helpful family. Always in my memory. Our prayers are with You. Sending our love, Bogi (from Poland Bogusia Węgrzyn, Elżbieta &Jerzy Wegrzyn&Marysia Jabłecka
Comment Share
Share via:
HS

Posted Jul 18, 2021 at 02:19pm
We're thinking of you during this difficult time. Your mom lived an extraordinary life and her legacy will continue. Sending our love. Marsha & Dave

Posted Jul 17, 2021 at 08:02pm
Our heartfelt sympathies to you and your family for the loss of your beloved mother. May her memory be a blessing and a comfort to you always.

Posted Jul 15, 2021 at 01:29pm
With sincerest heartfelt condolences to the Kiejdan Families , Mila and the DPM Staff

Thank you for the memorial tree planted in memory of our beloved mother.
NS

Thank you for the memorial tree that was planted in memory of our mother. 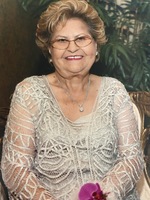