To share your memory on the wall of Melvin Parlin, sign in using one of the following options:

A local business leader, Mel became the second-generation owner and operator of Art Handler’s Appliance Center, a family business started by his father-in-law in 1947. In more than five decades in business, Mel enjoyed working with people and in making customers friends. That spirit which Mel embodied is carried on today by the third generation of family. In work and life, he was known for his kind and gentle nature and his unassuming ways. He lived a wonderful and happy life and touched the lives of many.

He is survived by his wife Sandra; his children Michel Sacks (Scot) and Sally Jo Carter (Christopher) both of Margate, NJ; his three grandchildren, Henry Sacks, Max Carter & Kate Carter; and his brother, Dr. Daniel Parlin. His family and friends will always remember his devotion to Sandra. While they were happy to simply stay at home, in later years they found joy in traveling, particularly to Paris. Whether in Margate or Boca, Mel could be found under an umbrella on the beach with his family, a smile on his face. He also enjoyed sharing a sandwich with goods friends at the casino.

Due to the pandemic, funeral services will be private. The family wishes to extend their deepest gratitude to the doctors and nurses at Jefferson University 3 Center Gibbon Building for their care and understanding.

The family asks that contributions in his memory be made to: The Heart of Healthcare Nursing Fund, Jefferson University/Office of Institutional Advancement, Department 825434, PO Box 71331, Philadelphia PA 19176-1331; or to: Shirley Mae/Michael J. Fund, PO Box 3265, Margate City, NJ 08402.
Read Less

Receive notifications about information and event scheduling for Melvin

Print
Services will be held privately.

We encourage you to share your most beloved memories of Melvin here, so that the family and other loved ones can always see it. You can upload cherished photographs, or share your favorite stories, and can even comment on those shared by others. 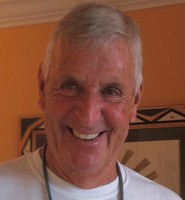