To share your memory on the wall of Shirley Snyderman, sign in using one of the following options:

Shirley was a lifelong resident of Absecon Island. She lived in Margate until relocating to Absecon in 2006. She was an accomplished rubber stamp artist and her love for cats is well known among friends. She worked for many years as the practice manager for Atlantic Cardiology Group and also worked at AtlantiCare. She was self-taught in many areas, including computers, investments and office design, not having the opportunity to attend college.

Shirley was preceded in death by her parents, William and Bessie Snyderman her sister, Eda Shulman, and her nephew, Eric Kozek.

She is survived by her daughters, Barbara Snyderman and Heidi Garrison (Mark). She is also survived by nieces Ellen Burnett and Barbara Kozek and nephew Lawrence Kozek (Doreene), her dedicated caregivers, Debi “Princess” and Millie, and her cats, My Buddy, Bessie, and Jackie in addition to many cousins and close friends.

The family would like to thank the staff of Holy Redeemer Hospice for their care in Shirley’s final days, especially John, RN and CC, HCA.

Receive notifications about information and event scheduling for Shirley

We encourage you to share your most beloved memories of Shirley here, so that the family and other loved ones can always see it. You can upload cherished photographs, or share your favorite stories, and can even comment on those shared by others.

Posted Dec 13, 2019 at 01:38pm
The picture of the cat is so apropos. Shirley, aka MomCat, loved her human and feline family. I have very fond memories of having brunch at her or Barbara's place years ago. She was a dear sweet person who will be greatly missed.
Scott Aikey
Comment Share
Share via: 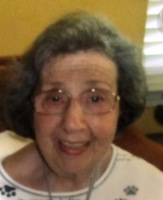