To share your memory on the wall of Seymour Gash, sign in using one of the following options:

We encourage you to share your most beloved memories of Seymour here, so that the family and other loved ones can always see it. You can upload cherished photographs, or share your favorite stories, and can even comment on those shared by others.

Posted May 15, 2019 at 06:26pm
"During this time of deep sorrow, may the loving memories of your loved one, and the support of family and friends help to comfort you. My condolences."
Comment Share
Share via:
ZI

Posted Apr 28, 2019 at 09:02pm
My deepest condolences to the family. Find much comfort from the Holy Scriptures. 2Cor1:3,4 provides much needed comfort. Also Psalm 55:22 Throw your burdens on Jehovah he will sustain you.
Comment Share
Share via: 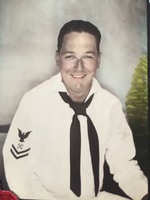