To share your memory on the wall of Richard Sorokin, sign in using one of the following options:

Born in South Philadelphia on May 12, 1935, to Louis and Rose Sorokin, Richard graduated from South Philadelphia High School for Boys in 1953 and earned his Master's in Education at Temple University ten years later in 1963. He spent most of his career teaching science and coaching diving and sailing at William Penn Charter School in Philadelphia.

On June 9, 1957, he married the love of his life, Marsha. For the next 64 years, they shared a wonderful adventure, a loving partnership filled with a lifetime of memories.

As a young man, Richard found his love for the sea and sailing as a Sea Scout. In 1961, he built his first sailboat – a GP 14 – in his Roxborough garage with his lifelong friend, Jim Eberle. Typical for Richard, he built the boat before he even knew how to sail. Their inaugural launch on the Cooper River was just the first of many he would build or restore in his lifelong passion for the sea.

Richard also loved to travel and used his summers to explore our beautiful country, camping in KOAs with his young family in tow. He led his family in a coast-to-coast musical repertoire that included every folk song in the book – from "If I Had a Hammer" and "Sloop John B" to his personal favorite, "There's a Hole in the Bucket."

Anyone who knew him will well will also attest to Richard's love of working with his hands. He could repair almost anything, and his garage was living proof – strewn with every tool you can imagine that collected over decades of building and fixing quite literally everything. Whether it was making furniture or helping Jim turn a bank into a beauty salon, No job was ever too big or small for "Dick" Sorokin.

In the summer of 1971, he took his young family on an adventure to Europe – not for a week's vacation but the entire summer. They camped across all of Europe (including Liechtenstein) on less than 5 dollars a day. But you may ask, what family of 4 can survive Europe on 5 dollars a day? The Sorokin's, of course! Together, Marsha and Richard went on to see the world – from Saint Petersburg to the Great Wall and everything in between – often with good friends like Janet and David Leavy.

The Margate home in South Jersey provided a summer refuge for his children and grandchildren, offering memories to last a lifetime – from sailing Hobie Cats off the beach to nights filled with Pinochle with family and friends.

Richard also volunteered his time in the Margate community for many years. He was a Vice Commodore at the Yacht Club and an active member of the Coast Guard Auxiliary, where he taught young Sea Scouts navigation and knot tying when he was not on safety patrol.

Richard is survived by his beloved wife, Marsha, and his children, Scott, and Holly, his brother, Hillard, and four adoring grandchildren — Jamie and David Utt, Jack and Katarina Sorokin.

He left us feeling, in Richard's own words, that he had a "good run." We agree. It was a remarkable run. And we are grateful for all the love and support that he provided.
Read Less

To plant a memorial tree in honor of Richard Sorokin, please visit our Heartfelt Sympathies Store.

Receive notifications about information and event scheduling for Richard

There are no events scheduled. You can still show your support by sending flowers directly to the family, or planting a memorial tree in memory of Richard Sorokin.
Plant a Tree

We encourage you to share your most beloved memories of Richard here, so that the family and other loved ones can always see it. You can upload cherished photographs, or share your favorite stories, and can even comment on those shared by others. 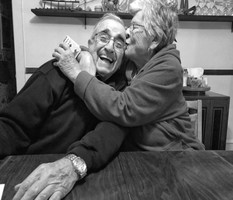