To share your memory on the wall of Janet Leavy, sign in using one of the following options:

Provide comfort for the family of Janet Leavy with a meaningful gesture of sympathy.

Janet started her education at Massachusetts Ave. Grade School and graduated from Atlantic City High School in 1960. One year later, on June 11, 1961, Janet married the love of her life, David. Janet grew up on Seaside Ave. in Atlantic City and spent her adult life living in Margate with her husband and family.

When Janet turned 37 years old, she decided to fulfill her lifelong ambition to become a nurse. Three years later, at age 40, she graduated from Atlantic Community College with a degree in nursing and passed her board to become a registered nurse. Her first nursing position was with the City Division of AtlantiCare in pediatrics. For the next 17 years, Janet dedicated herself to being a loving, caring, and wonderful nurse. She retired in 1999 to care for her husband who was in recovery from leukemia.

Janet’s entire life has been devoted to caring and loving the people close to her, and to the community at large. During her adult life, Janet raised her family, cared for her parents, and volunteered for community and charity organizations. She was a board member of her favorite charity, Ruth Newman Cancer and Heart Fund, as well as an officer, for over forty years.

Janet was a very special, loving, selfless, and caring person. The first thing you noticed about Janet was her flaming red hair and the bright smile that lights up a room. Then, her gentleness, kindness, humor, and intelligence shines through. Janet enjoyed life to its fullest. She was dedicated to raising her family and caring and giving to others. Her biggest pleasure was living and sharing life with her husband and best friend, David.

Janet was so busy taking care of everyone that no one realized that Janet had Alzheimer’s Dementia until 15 years ago. Janet fought a courageous battle and still shared her love with all.

A special thank you to the caregivers and staff at Brandall Estates who took care of Janet until her passing.

Janet will be missed by all who were blessed to know her.

Donations may be made in memory of Janet to the Ruth Newman Shapiro Cancer & Heart Fund, 102 N. 35th Ave., Longport, NJ 08403, to the Delaware Valley Chapter Alzheimer’s Association, or to the charity of your choice.
Read Less

To plant a memorial tree in honor of Janet Leavy, please visit our Heartfelt Sympathies Store.

We encourage you to share your most beloved memories of Janet here, so that the family and other loved ones can always see it. You can upload cherished photographs, or share your favorite stories, and can even comment on those shared by others.

Posted Jul 19, 2019 at 07:28am
Always remember Dave and Janet coming in the library in Ventnor or walking the boardwalk. Always together, caring. Sweet memories. My condolences. Faith DeLany.
Comment Share
Share via:
JB

Posted Jul 13, 2019 at 01:35pm
We remember Janet from the days she sold sample clothes. She was pleasant and fun. We knew her as David's wife during the years he operated City Supply. Then we saw her during her Alzheimer years when she was company for our sister Irma. Hopefully the two of them will re-unite in Heaven and enjoy peace.
Jean and Burt Bennett
Comment Share
Share via: 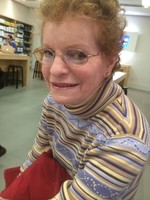