To share your memory on the wall of Florence Lischin, sign in using one of the following options:

Florence’s journey through life began as the eldest of four sis... Read More
Florence Mary Lischin (née Levine), 92, of Margate City, NJ, passed away very peacefully at home surrounded by her family in the early morning hours of February 1, 2020.

Florence’s journey through life began as the eldest of four sisters and one brother born to Nathan and May Levine (née McHugh) in 1927. The family of seven lived in close quarters on Congress Avenue in Atlantic City in those Great Depression era years. Florence often cared for and helped raise her younger brother and sisters while growing up at the shore. They enjoyed very simple pleasures such as strolling the Boardwalk or cooling off in the summer on the beautiful Atlantic City beaches.

Florence was a true lover of Atlantic City. She could never envision living anywhere other than the “Queen of Resorts”. She was born in Atlantic City and lived her entire life in the Atlantic City and later Margate areas. As a graduate of Atlantic City High School Class of 1945, Florence pursued a career in business and accounting. She possessed an incredible gift for working with numbers which served her well as a bookkeeper for Atlantic City based Kligerman Dairies. Florence used these bookkeeping and accounting skills later in the family businesses at Atlantic Meats and Center City Cold Cuts with her husband Richard and at Bayview Animal Hospital with her son Andrew. Her incredible memory and sharp pencil helped all these businesses achieve marked success.

Florence had a knack for financial insight. She often frequented the world of investing and would usually make the financial page of the newspaper or CNBC her first read of the morning. Florence also enjoyed and excelled in television game and quiz shows such as Jeopardy and Wheel of Fortune. We all can still remember the spinning globe of the earth to begin her favorite soap opera “As the World Turns”. She also could not be topped in a spirited game of “Name the State Capital” which she often played with her son Andrew.

Florence met and married her true and lifelong love Richard in 1954. They spent the rest of their lives together in a marriage lasting over fifty years. They became so inseparable such that you could not say the name of one without thinking the other. It was Florence and Richie forever. Florence’s true dedication was to her home and family. Florence devoted her life to the happiness of her husband Richard, her children Andrew and Susan, and her grandson Kevin. She would readily sacrifice her own needs to assure the happiness and success of her children and family. Her greatest joy came from her family and making her home a place of great love, peace and contentment. She would always place the happiness of her family as her most important concern and took great pride in the successes and achievements of her children.

Much as in the movie “It’s a Wonderful Life” in which we are shown how many lives we touch over the years, Florence not only touched many lives but made each one better. Her contagious smile, positive attitude, unbridled optimism, and dry wit could bring sunshine to even the darkest of days. Florence was a member of the “Greatest Generation”. The Generation of Americans who survived the Great Depression, won the Second World War, and prevailed in the Cold War over the Soviets. This was a generation of Americans who believed in hard work, honor, honesty, and integrity and modeled their lives by these values. Each day we lose more and more of members of this Greatest Generation and with them this rich heritage which defines America. The losses of Florence and her husband Richard fifteen years ago take with them a part of that heritage and we will all truly cherish the great gifts, values and love they brought to us. It is said “ They are never gone as long as they are remembered”. Their absence creates a tremendous void in our hearts and they will forever be remembered with unending love.

A funeral service will be held on Tuesday, February 4, 2020 at 11:00am at Roth-Goldsteins' Memorial Chapel, 116 Pacific Avenue, Atlantic City. Interment will follow in Beth Kehillah Cemetery, Egg Harbor Township.

Donations may be made in lieu of flowers to the charity of your choice.
Read Less

Receive notifications about information and event scheduling for Florence

We encourage you to share your most beloved memories of Florence here, so that the family and other loved ones can always see it. You can upload cherished photographs, or share your favorite stories, and can even comment on those shared by others. 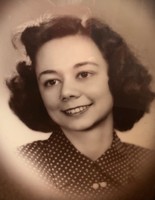