To share your memory on the wall of David Frolow, sign in using one of the following options:

Print
"What matters is how we live and love and how we spend our dash"- by Linda Ellis, Copyright 2020, thedashpoem.com

David Lee Frolow, age 85 of Margate, met his maker January 21st, 2021. He was born (October 10, 1935) and raised in Atlantic City, NJ and graduated Atlantic City High School class of 1954. David was a 3rd generation barber and spent 60 years cutting hair as owner of David Lee’s barber shop in Ventnor, NJ before joining Anthony’s Salon in Margate. In 1962 he married his sweetheart, Diana and started a family. He was a proud member of the Old Guard 3rd Infantry (1958-1962), member of the American Legion Member Post 352, and Past Worshipful Master of Trinity Justice Lodge #79. But above all his accomplishments, his biggest pride and joy was being Poppy to his eight grandchildren!

A gregarious fellow and a charitable soul, David was a friend to all. He loved to share a laugh and was passionate about golf. Ever the avid sports enthusiast, David enjoyed coaching Ventnor Pirates football and when he wasn’t watching sports (which was constantly), he enjoyed a Mel Brookes film or an old war movie. One of his most rewarding experiences was being a mentor to his friend Billy. Summers were spent barbecuing ribs, steaming crabs, or taking his family out for meals.

Whether you knew him by Dave, Juice, The Man, King Solomon, Mentor, Coach, Barber, or as family, he treated you with just the same love and generosity. David would never pass up an opportunity to make someone smile with his good old dollar bill trick, a little serenade, a dance, or a perhaps a goofy face! He surely lived his dash with much fun and love! His legacy will live on in the hearts and minds of everyone who knew him.

Please share your stories of remembrance on social media. Services will be announced at a later date.

In lieu of flowers, family asks for donations to be made to an organization or charity of your choice in David’s honor. And to honor of David be sure you live your dash to the fullest! https://thedashpoem.com/dash-poem-meaning/
Read Less

Receive notifications about information and event scheduling for David

There are no events scheduled. You can still show your support by sending flowers directly to the family, or planting a memorial tree in memory of David Lee Frolow.
Plant a Tree

We encourage you to share your most beloved memories of David here, so that the family and other loved ones can always see it. You can upload cherished photographs, or share your favorite stories, and can even comment on those shared by others.

Posted Feb 04, 2021 at 09:18pm
Our thoughts and prayers are with you. His memory will be with all of those that surrounded him. With our love and sincerest sympathy,

Posted Feb 02, 2021 at 11:32am
Diana, we are so sorry for the loss of your David!! He really was one special guy!!! I always loved being in his company as he always had a never-ending smile and a kind and fun word for everyone! It was such a joy to be in his presence!!
I recall exactly that on January 21, (really) I was going through some family photos when I ran across one of David and you in front of Lucy the Margate Elephant when we just happened to run into you guys... I was so surprised and happy to see you all that day ! Our meeting brought back such happy memories!
Now, I'm certain David is in heaven and making it even a happier place!!! I was so blessed to have him as a friend!!
Anna and I and Rae Carol
wish you and Dawn and Bobby and your entire family our deepest condolences!!
With much love and God's blessings...
Billy & Anna West
Bedford Texas
Comment Share
Share via:
AP

Posted Feb 01, 2021 at 04:52pm
Dear Diana and Family,
We were so very sorry to hear of Dave's passing. We pray God gives all of you the strength to get through this difficult time. Please know we are thinking of you and you are very much in our prayers. I can still see the two of you on the dance floor at our 50th Class Reunion. I am sure there was quite a reunion when he saw Donna. God bless you. Stay safe.
Tom and Arleen Pajic

Posted Feb 01, 2021 at 11:13am
I want to extend heart felt prayers & sympathies to the whole Frolow Family & Friends. Dave was a greta person & friend and a great mentor. RIP Dave!! May God Bless you & Keep You!!!
Comment Share
Share via: 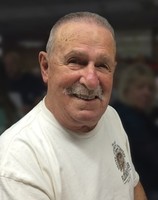