To share your memory on the wall of Bessie Green, sign in using one of the following options:

Bessie Jennie (Yoffee) Green was born in Diamondtown, within the township of Mount Carmel, Pennsylvania on August 9, 1923. The third child and first daughter of Max and Sarah (Wishkin) Yoffee, she attended public schools in the region graduating from Coal Township High School in 1939. During WWII, Bessie worked as an office manager and assistant to the owners of Shroyer’s Dress factory and the National Ticket Company.

In October, 1946, she met Erwin D. Green, aka “Sonny”, a Field Surveyor with the U.S. Army Corps of Engineers. From New York, stationed in Sunbury, PA, and looking for a good home cooked Jewish meal, Sonny was introduced to Bessie and the Yoffee family of Shamokin, Pennsylvania. She accepted his proposal on New Year’s Eve, 1947, and was married a few months later on March 16, 1947. Early in their marriage they lived in Sydney, New York and Williamsport, Pennsylvania before they relocated to Atlantic City, New Jersey (1953) and Ventnor, New Jersey (1965), where she lived until 2015. She recounts telling Sonny that Atlantic City was the last stop, it was time to plant roots with their infant son Barry.

When her children were all enrolled in school, Bessie went to work. She was the night auditor of the Virginia Hotel, when the Steel Pier was in its hay day. She was also the head checker of the personalizing department at Spencer Gifts’ catalog division until her retirement in 1985.

The Greens maintained an active commitment to volunteering and community service. Bessie was a very involved officer of the Chelsea Heights Elementary School PTA. She was an active member of the Women’s Auxiliary of the Knights of Pythias A.C. Chapter #98, where her husband served as Grand Chancellor in 1981. In addition, she was their chief loan officer in their National Credit Union. She was affiliated with Beth Israel and the Rodef Sholom Synagogue in Atlantic City, where she and Sonny were very active members taking part in fundraising, Purim plays, and most important to them providing their three children with a Jewish education at the associated Atlantic City Free Hebrew School. It was within these groups where they forged lifelong friendships.
Bessie loved and supported the casino industry in Atlantic City. Despite her math skills throughout her career as a hotel night auditor and loan officer, somehow you could never figure out if she won at the casinos. Her answer “I started out with $100, then I won, and then I put it back into the machine, and then I hit triple bars and then the lights kept flashing.” Only she knew! And we were entertained.

Bessie moved to Harrisburg, Pennsylvania in 2015 where she lived until her death. She is survived by her children – Emmett Barry Green, Maxine C. Green (Scott Silverstine), and Arthur C. Green (Jill Green). She is the proud grandmother of eight grandchildren – Austin B. Green, Daniel Green, Todd B. Green (Justine Green), Matthew E. Green, Jordann R. Silverstine, Samuel M. Silverstine, Dina Green, and Noah E. Green. She is the great grandmother to Theo and Amelia Green. In addition, she is survived by her sister in law, Chickee M. Yoffe.
She was predeceased by her husband of 48 years, Erwin D. (Sonny) Green, and her siblings Milton Yoffee, Lewis Yoffee, Rebecca Winnick, and Morris Yoffe.

She was the aunt, great aunt and great great aunt of many loving nieces and nephews from Maryland, Pennsylvania, Massachusetts, California, Florida, Washington, Arizona, and New York. They delighted her with visits to the Jersey shore to spend Shabbos with her and her fabulous Friday night chicken. In the past four years, they continued their visits and phone calls for the holidays, Shabbos, birthdays, and special afternoons of fun, laughter, and memories.

The Green family would like to thank the entire staff of The Jewish Home of Greater Harrisburg, who never let a day go by without a friendly hello, and concern for her health and welfare. Their kindness and compassion to our Mother was a source of comfort to our family. The sisterhood of personal aides and caregivers in the Harrisburg community is beyond anything we could have ever imagined. Our thanks for your devoted care to our Mother.
Donations in memory of Bessie Y. Green can be made to The Jewish Home of Greater Harrisburg (4000 Linglestown Rd, Harrisburg, PA 17112) or Hospice of Central Pennsylvania (1320 Linglestown Rd, Harrisburg, PA).
Read Less

Receive notifications about information and event scheduling for Bessie

We encourage you to share your most beloved memories of Bessie here, so that the family and other loved ones can always see it. You can upload cherished photographs, or share your favorite stories, and can even comment on those shared by others.

Posted Oct 10, 2019 at 08:12pm
I am so sorry for your loss.
Aunt BESS was very special!
From early on my fondest memories were spent with Aunt BESS, Uncle Sonny,
Barry, Maxine and Arthur.
Aunt BESS always insisted she and I go to DQ for hot fudge sundaes!
And even now, the smell of coffee brings me back to Aunt Bess’s percolator!
You were my 2nd Mom! You will be missed!
Love Annette
Comment Share
Share via:
SG

Posted Oct 08, 2019 at 03:32pm
My thoughts are with the Yoffee & Green families at loss of Bess Y. Green, mother, aunt, & grandmother. She was an amazing person who will be missed. I remember trips to the beach 🏖 with her in Ventnor.
Comment Share
Share via:
S

Posted Oct 08, 2019 at 03:23pm
This tree is being planted in honor of my great aunt, Bess Yoffee Green. She was an amazing person who lived a long life. Bess’s memory will always be in our hearts.

Posted Oct 08, 2019 at 01:40pm
Dear Green Family,
I am so sorry for your loss. Aunt Bess was an amazing woman. She was the matriarch of the family and was always warm, welcoming, and nurturing. I have many great memories of her and I hope you're surrounded by the love of family and friends during this time of grief.

Posted Oct 08, 2019 at 12:15pm
In loving memory of Aunt Bess.
She will always be remembered for her warmth, kindness and generosity. I will always remember the summer vacations at the beach in Atlantic City.
She was a special lady & you were fortunate to have her for 96 years. 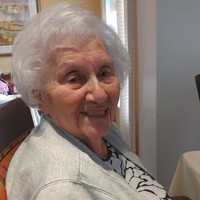 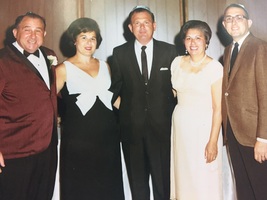